How to Make Your Home All-Electric

A mixed-fuel home, which is one with both electric and fossil fuel systems, often relies on gas, oil, or propane to power things like the furnace, water heater, or cooktop. This costs more upfront than an all-electric home, as seen by the Rocky Mountain Institute's recent report. All-electric buildings also have the added benefit of being environmentally friendly, so you can see why homeowners, builders, and developers are pursuing these types of spaces. So, how can a new or existing home go all-electric? It's surprisingly simple. The Center for American Progress mentions a need to adopt just a few key appliances in your home, and we’re breaking those down for you below!

The Appliances Holding You Back From Being All-Electric

If you live in an area that requires heating, you've likely heard it's cheapest and easiest to go with natural gas, propane, or oil as your heating source. But, that just isn't true. While gas boilers or furnaces tend to be cheaper to install, they rely on fossil fuels to operate, which means they’ll never be 100% efficient. And, these heating options release carbon dioxide into the atmosphere when running. There are electric alternatives that costs more to install , but are far more efficient than their fossil fuel counterparts.

Heat pumps have the ultimate efficiency advantage. It takes two to six times less energy to power a heat pump than a gas furnace; in other words, it is two to six times more efficient than the best gas technology. If you go with a heat pump you'll be heating and cooling with a system powered by electricity. Moreover, you can combine your heat pump with solar energy, which can cut the cost of your heating bills in half or cover the power needed to heat and cool completely.

Want a quick run-down of how heat pump technology works? There are two kinds of heat pumps: geothermal heat pumps (also known as ground source) and air source heat pumps. Both options offer heating and cooling at lower cost than traditional HVAC options, but geothermal is the most energy-efficient and cost-effective over the lifetime of the system.

A recent Energy Information Administration (EIA) report notes that “natural gas use for heating is declining. Every region in the U.S. except for the Northeast is seeing a slight drop in favor of electricity.” This movement is driven by a need to replace the dwindling supply of fossil fuels with renewable energy sources like wind, solar, geothermal, etc. in order to reduce carbon emissions. A shift to all-electric spaces is inevitable because we will eventually run out of fossil fuels, but it’s also a great choice in support of our environment and quite honestly, your wallet.

Similar to heating and cooling, traditional water heaters operate by using fossil fuels like gas and propane, or electric resistance (think how a toaster operates). While electric resistance water heaters do use electricity to operate, they do so at a less efficient rate. If you want to go all-electric, conserve energy, and save money, heat pump water heaters (HPWP) are the way to go. This is the same technology as the heat pumps used for heating and cooling, but instead their purpose is heating your water. And in fact, you can even install a heat pump system to do heating, cooling, and hot water!

Because 18% of the energy you use in your home comes from your water heater, it’s important to have the most efficient unit you can to meet your needs and save you money. According to the Pacific Northwest National Laboratory, heat pump water heaters alone can use up to 63% less energy than traditional electric water heaters. And, the Department of Energy's ENERGY STAR program demonstrates that the average four-person household can save $350 per year on electric bills and $3,750 over the lifetime of a heat pump system. Remember that efficient appliances that use clean energy (meaning, renewable energy) reduce environmental impact. An analysis by the Sierra Club found that installing electric heat pumps as an alternative to the gas furnace plus gas water heater combo can reduce heating emissions by more than 45% over the next 10 years. Moral of the story? Heat pumps, for both home heating and water heating, are the way to go for environmental benefit and cost-savings.

Many consumers have a strong attachment to their gas-burning stoves. You'll hear that stovetops with the little blue flame cook faster and more evenly – allowing the cook to have more control. Often, people develop an emotional attachment to that little blue flame, so a change-up to this appliance might feel particularly difficult. Here are a couple things to consider about the differences between the three stovetop options that are out there.

A gas stove typically costs 10 – 30 percent less to operate than an electric stove, but it produces more indoor pollution and is less energy-efficient. One report states that four decades of evidence shows that gas stoves lead to unhealthy level of indoor air pollution.

The most well-known alternative to gas is a simple electric stovetop, which is more energy-efficient. Seventy-four percent of the energy consumed by an electric stovetop is transferred to food, while only 40 percent is on a gas range.  Electric stovetops aren’t favored by the cooking elite because they take longer to heat up and can provide inconsistent temperatures. You can see it’s sort of a toss-up between these two cooking appliances, especially when cooking preferences are taken into account.

The good news is, there’s a third option! And we think you’re going to like it. Induction stovetops became popular just before the recession hit in the early 2000s, which might be one reason why they didn’t catch on right away. A recent Wall Street Journal (WSJ) article does an excellent job summarizing the heating technique for induction stoves. Here’s an excerpt:
“Unlike gas stoves that rely on exposed flames or conventional electric ones that heat the burners you cook on, induction ranges send electromagnetic currents directly into the bottom of pots and pans—heating cookware and their contents in a flash, but not the surrounding stovetop or the air. The result is a safer hob that spews fewer pollutants, uses less energy and allows food to reach higher temperatures faster than your old stove.”

To elaborate, there is less likelihood of fire-related incidents because there is no open flame, there’s an increase in safety as the burner only functions when in contact with a pan, and there’s no release of nitrogen dioxide or ultrafine particles into the air. Moreover, the stovetop uses less energy because it heats cookware directly and has been shown to be as efficient as or more efficient than traditional electric models. A study titled "Induction Cooking Technology Design and Assessment" notes that induction cooktops transfer 90 percent of the energy to food. So, if you're looking to appease the environment, your indoor air quality, your wallet, and your cooking preferences – an induction stovetop is a win all around.

If you're looking to build a new home, an all-electric model can be simple because you choose all of your appliances upfront and can design your home with them in mind. Retrofitting a home can sometimes be more challenging depending on your location, home setup, voltage, lot size, etc. However, it can be done! There’s no pressure to replace all your appliances at once, and in fact, it’s completely reasonable to wait until your current model needs replacement before purchasing a more efficient system. An incremental approach allows you to work within budget, and in many instances the slight difference in upfront cost for a new energy-efficient appliance is only a small premium over the money you were going to spend on the replacement anyway. Regardless of whether you’re building new or retrofitting a current home, there are many factors to consider, and you are not expected to figure it all out alone. We would love to help you take steps toward creating a cost-effective, energy-efficient, and environmentally-friendly home that's all-electric.

Advances in technology, clean energy financing, and a better understanding of how energy-efficient p...

UPDATE OF EMPORIA VUE SMART HOME ENERGY MONITOR In this video you will see Jonathan recap  his effic...

The Guide to Energy-Efficient Homes and Buildings

Advances in technology, clean energy financing, and a better understanding of how ...

How to Make Your Home All-Electric

A mixed-fuel home, which is one with both electric and fossil fuel systems, often relies on gas,... 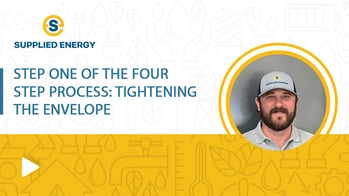 Step One of the Four Step Process: Tightening the Envelope

August 2021 we had the pleasure of heading to Germantown Tennessee to do a roof mount solar...